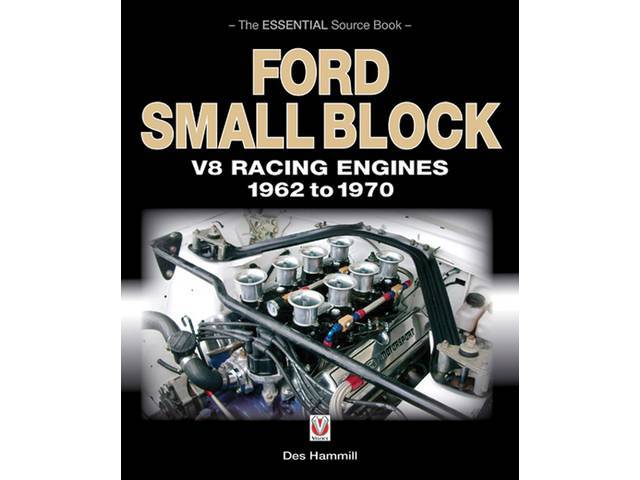 BOOK, Ford Small Block V8 Racing Engines 1962 to 1970, the Essential Source Book, by Des Hammill, This is the story of the Ford small block Fairlane V8 engines rapid evolution from passenger car engine to highly successful racing engine and the victories it fueled for years after words, Initially, in May 1960, a team of nine engineers, lead by George Stirrat, designed a lightweight, all cast iron, compact, reliable and durable power plant for passenger cars, but following its introduction in July 1961, Fords engineers quickly realized its potential benefits if modified for racing applications, Within three months, the capacity had been increased from 221 to 260 cubic inches, and by early 1962 Carroll Shelby had fitted a high Performance 260 version into his AC Cobra, Subsequently, the original design team began work on a second capacity increase, to achieve a High Performance 289 cubic inch unit and within three months the standard 289 became available. Carroll Shelby went on to win the 1965 World Sports Car Championship using a 289HP, Aluminum block and cylinder head push rod versions, designed in late 1962, had been constructed by early 1963 in preparation for that years Indianapolis 500 and a DOHC 255 CID version raced in 1964 & 1965, This book continues with the GT-40 program and covers through the SCCA Trans-Am engines and more to 1970, 176 pages, 125 color photos, soft bound

100% of reviewers recommend this product.

YES I would recommend this product.