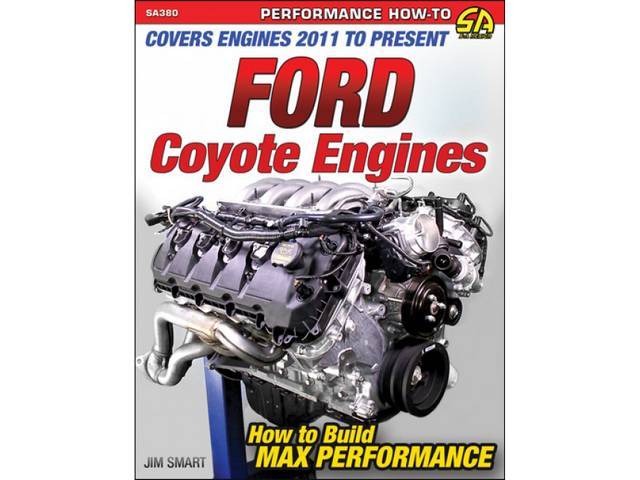 Realize your Ford Coyote engine's full potential by using this detailed resource as a guide to select the right parts for the street or the strip. Veteran Ford writer and historian, Jim Smart, explains and highlights all of the latest and greatest options to achieve more horsepower and torque, and of course, faster quarter-mile times in Ford Coyote Engines: How to Build Max Performance.

Some upgrades included are engine building techniques, cold-air induction kits, supercharger and pulley kits, better exhaust headers, fuel system and ECU tuning upgrades, and more. Both Ford and the aftermarket have produced an array of parts to squeeze even more power out of your Coyote. Ford introduced its first clean slate design V-8 engines in the early 1990s in Ford, Lincoln, and Mercury models. Known as the "Modular" engine family, the 4.6L engines employed new overhead cams, multi-valve performance, distributorless ignition, and more. This engine had new technology for its time, and it proved to be an extremely durable workhorse that logged hundreds of thousands of miles in police and taxi applications as well as light-duty trucks. And, of course, hotter versions, and even supercharged versions, found their way into performance applications such as Mustang GTs and Cobras.

By 2011, Ford wanted something hotter and more current, especially for its flagship Mustang GT and GT350 models, which were suddenly competing with new 6.2L LS3 engines in Camaros and 6.4L Hemi engines in Challengers. Enter Ford's new 5.0L Coyote engine with Twin Independent Variable Cam Timing (Ti-VCT); it was an evolution of the earlier 4.6L and 5.4L Modular designs. Although the new Coyote engine had increased displacement, it still had far fewer cubes than the competition. Despite less displacement, the Coyote could hold its own against bigger Chevy and Chrysler mills thanks to advanced technology, such as 4V heads with better port and valvetrain geometry. The Coyote is also Ford's first foray into technology that includes Ti-VCT and cam-torque-actuated (CTA) function, which is a fancy way of saying variable cam timing for an incredible power curve over a broader RPM range.

Even with all of this new technology, there is always room for improvement. If you are looking for even more power from your new Coyote, look no further than this volume.