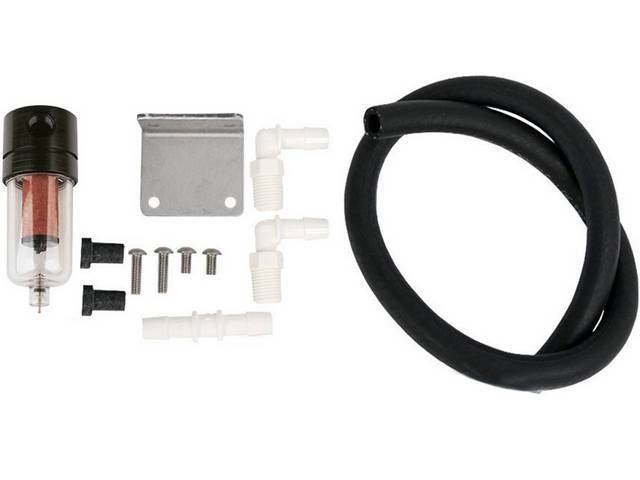 Steeda's oil separator kit reduces detonation, oil burning and deposits on the valves by removing oil drawn through the PCV system before it can contaminate the intake charge. Originally designed for the '03-'04 Cobras, this kit features a clear bowl and is designed for a 3/8" and 1/2" PCV system. Mounting bracket included.

Excess crankcase pressure (sometimes known as "blow-by") is vented from the crankcase through the PCV system, where it is drawn into the intake manifold and returned by the engine. This re circulated air contains aerated oil from the crankcase which is burned by the engine. Supercharged, nitrous-boosted and high mileage engines often draw excessive amounts of oil into the engine through the PCV system. The Steeda oil separator plugs into the PCV hose between the PCV valve and the intake manifold and removes aerated oil from the re circulated air and collects it in a tube that can be drained and recycled.

Not approved for sale in California or states that require a California E.O. #. This part has been designed and is intended for off-road application only. Installation of this part on a vehicle that is driven on public roads may violate U.S. and Canadian laws and regulations.

Federal and several state and provincial laws prohibit the removal, modification or rendering inoperative of any part that affects emissions or safety on motor vehicles used on public streets or highways. Steeda Autosports assumes no liability for any violations arising out of any federal, state or provincial emissions or safety requirements on motor vehicles arising out of the customer's modifications and/or use of Steeda products. It is the responsibility of the customer to determine if their modified vehicle complies with applicable laws.

This product is Not legal for Street or Off Highway use in California or in states that have adopted California Emissions Regulations and is only intended for Closed Course Competition use.